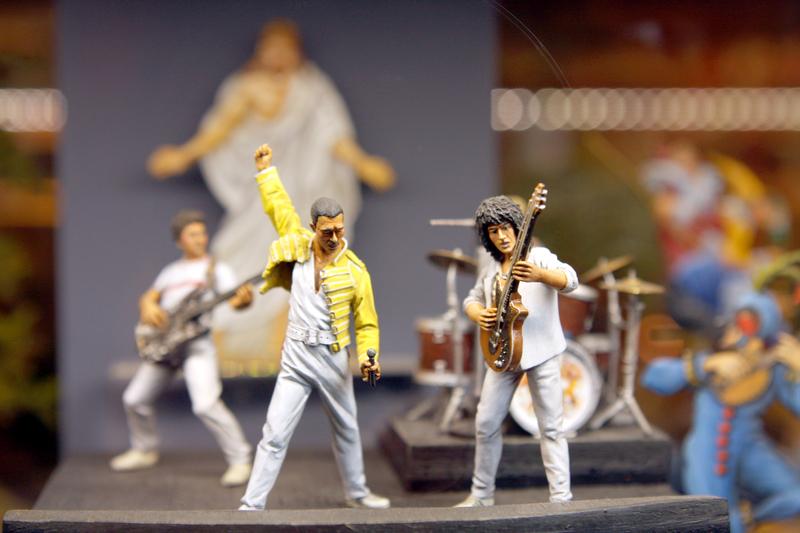 Queen Under Pressure: The Ultimate Collaboration

Collaboration at its finest: The Making of Queen Under Pressure…

When Queen and David Bowie teamed up in 1981 to record Under Pressure, they created a song that would go on to become one of the most iconic and enduring works of their respective careers. With its driving bass line, powerful vocals, and thought-provoking lyrics, Under Pressure continues to be a fan favourite to this day, regularly appearing on lists of the greatest songs of all time.

But what makes Under Pressure such a great song? The answer, in large part, is collaboration. The chemistry between Queen and David Bowie, the melding of their different styles and influences, and the creative process that brought the song to life all played a vital role in its success.

In this article, we’ll explore the history of Under Pressure, the creative process behind it, and the ways in which collaboration can be used to create something truly special. From the benefits of collaboration to the power of different perspectives, we’ll see how working together can lead to great success.

The History of Under Pressure

The origins of Under Pressure can be traced back to a chance jam session between Queen and David Bowie in 1981. The two iconic artists had previously met on a few occasions but had never worked together in a professional capacity. That all changed when they found themselves in the same recording studio in Montreux, Switzerland. Queen was working on their album “Hot Space,” and Bowie was in town to perform at the Montreux Jazz Festival.

The initial jam session between the two artists was informal and unplanned, but it quickly turned into something more. The musicians began playing around with a bass riff that Bowie had written, and before long, a song began to take shape. The collaboration was sparked with mutual respect for each other and the recognition that there was something special about the song that was forming.

Over the course of the next few days, Queen and Bowie continued to work on the song, refining the lyrics, experimenting with different musical elements, and finally recording the final version. The song’s name Under Pressure was a reference to the feeling of being put under pressure, both by the demands of creating something new and also the tension in the studio of two big artists working together.

Under Pressure was originally released to critical acclaim in October 1981, and it quickly became a hit. The song reached number one on the UK Singles Chart and went on to be a top ten hit in several other countries. The song was also well received by critics, who praised its unique sound and powerful lyrics. The song was included in Queen’s album “Hot Space” and has since become one of the band’s most enduring hits.

The creative process behind Under Pressure was a true collaboration between Queen and David Bowie. The two artists brought their unique styles and influences to the table, and through a process of experimentation and exploration, they were able to create something truly special.

One of the key elements of the collaboration was the way in which the two artists bounced ideas off each other. Bowie had written the initial bass riff that served as the foundation of the song, but it was through the input of the other members of Queen that the riff developed into something more. Similarly, Bowie’s lyrics were shaped and refined by the input of the other band members.

The lyrics of the song reflect the themes of collaboration and the pressure that can come with it. The line “It’s the terror of knowing what this world is about” speaks to the fear of the unknown that can accompany new ventures, while the line “It’s the fear of falling and catching fire” evokes the risks inherent in any creative endeavour.

Musically, Under Pressure is a unique blend of Queen’s rock sound and Bowie’s more experimental style. The driving bass line is reminiscent of Bowie’s earlier work, while the guitar work and drumming are quintessentially Queen. The song is also notable for its dynamic structure, with changes in tempo and key throughout, which keeps the listener engaged and interested.

The creative process behind Under Pressure is a great example of how collaboration can lead to something truly special. The song is a perfect combination of different styles and influences, resulting in a unique and powerful piece of music.

The Power of Collaboration

The success of Queen Under Pressure is a testament to the power of collaboration. By working together, Queen and David Bowie were able to create something that neither of them could have accomplished on their own. But what are the benefits of collaboration and how can it lead to success?

One of the biggest benefits of collaboration is increased creativity. When people with different backgrounds, experiences, and perspectives come together, they bring new ideas and ways of thinking to the table. This can lead to the development of new solutions and approaches and can ultimately result in more innovative and exciting results.

Collaboration can also lead to a more diverse range of perspectives. This can be especially valuable in situations where a group of people with similar backgrounds and experiences might not be able to see all the possibilities. Collaboration can help to break through this kind of groupthink, resulting in better and more well-rounded decisions.

Another benefit of collaboration is the ability to bring new ideas to the table. One person may have an idea for a song or a product, but without the input of others, it may never reach its full potential. Collaboration allows for the development and refinement of ideas, leading to better and more successful results.

Under Pressure and Pop Culture

Under Pressure has had a lasting impact not just in the music industry, but also in popular culture. The song has been featured in numerous films and TV shows, solidifying its place as a classic and an anthem.

In movies, it has been featured in films such as “Shaun of the Dead”, “Drive”, and “Baby Driver” to name a few. In these films, the song’s powerful lyrics and driving beat perfectly complement the mood and atmosphere of the scenes.

In TV shows, Under Pressure has also played an important role as well. It has been featured in shows such as “Stranger Things” and “Glee”, where the song has been covered and performed by the cast members. This gave a new generation an opportunity to discover and appreciate the song.

Additionally, the song has been used in commercials and video games, showcasing its wide appeal and universal relevance. The song is an anthem for struggle and overcoming pressure, making it an ideal choice for a wide range of media.

Did David Bowie and Queen perform Under Pressure together?

Yes, Queen and David Bowie did several live performances of Under Pressure. The most notable of the live shows was at the Freddie Mercury Tribute Concert in 1992, where Bowie appeared with Queen on stage to sing the song in honor of their late frontman. Bowie performed the track with Queen at Live Aid in 1985 as well.

Did David Bowie sing with Queen?

Yes, David Bowie appeared with Queen on Under Pressure and during their collaborative performance at the Freddie Mercury Tribute Concert in 1992. He also performed the song with them at Live Aid 1985 at Wembley stadium.

Who actually wrote Under Pressure?

Under Pressure was written by David Bowie, as well as Freddie Mercury, John Deacon, Brian May, and Queen drummer Roger Taylor. The song was created through a collaborative process, with each of the musicians contributing to the song’s lyrics, music, and production.

Queen drummer Roger Taylor met Freddie Mercury while they were both students at the Ealing Art College in London, England. They met in 1969 and went on to form Queen together with Brian May and John Deacon.

Did Queen perform Under Pressure at the Freddie Mercury Tribute Concert?

Yes, Queen did perform Under Pressure at the Freddie Mercury Tribute Concert, which was held on April 20, 1992, at Wembley Stadium in London, England. David Bowie also performed it live with the band at the concert.

Queen Under Pressure is more than just a song, it’s a powerful example of the benefits of collaboration. Through their partnership, Queen and David Bowie were able to create something truly special, a song that continues to resonate with fans around the world more than 30 years after its release.

The post has explored the history of the song, the creative process behind it, and the ways in which collaboration can be used to create something truly amazing. From the benefits of collaboration to the power of different perspectives, it’s clear that working together can lead to great success.

If you’re interested in learning how to play an instrument, create music, or collaborate, then be sure to check out the courses on Elevate today.