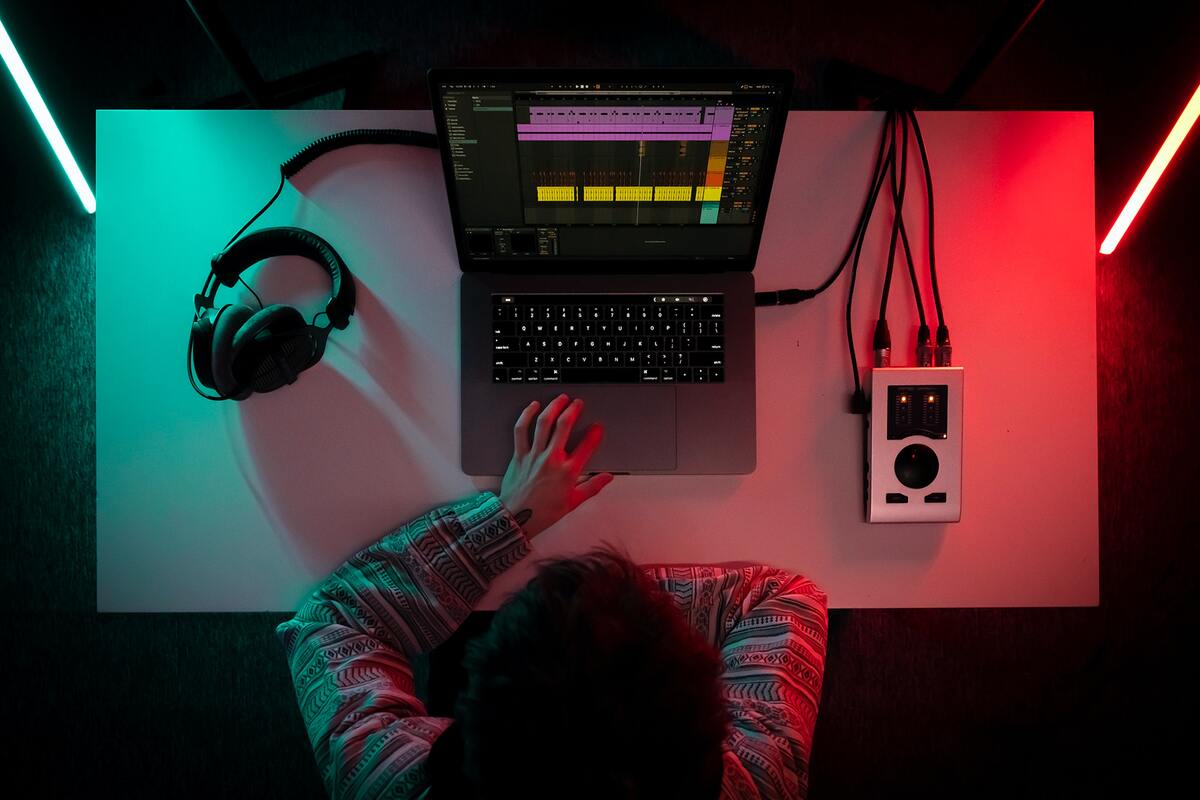 Its time to explore Ableton Live vs FL Studios, in this article we profile two of the best Digital Audio Workstations to help select the best one for you…

Music industry technology is developing at pace and is now more accessible than ever for music makers of all kinds thanks to competitive software pricing and our increasingly connected lives.

If you’re a songwriter or producer, then it’s likely you’ll be using a digital audio workstation or DAW to help you create your music. Thanks to technological advances, you can easily write, edit and produce a track just using a DAW installed on your laptop. For those at the beginning of their musical journeys, choosing a DAW can be tricky as you’re faced with so many options.

However, from doing some quick online research, you’ll soon see that Ableton Live and FL Studios are two of the most popular. They’ve both been on the market for some time and offer an armoury of musical features. And at ICMP, we offer numerous courses offering introductions to Ableton Live and Ableton Push. But which might be the best piece of software for you?

Like many decisions, the DAW you ultimately opt for can depend on personal preference, who introduces them to you or if one of your favourite acts or artists uses them.

It’s certainly subjective but here we’ll explore both DAWs in more detail to help give you more information on each and make the decision-making process a little easier.

So here we go Ableton Live vs FL Studios

Ableton Live landed in the music software market back in 2001, initially as a looping and arrangement tool. It’s since expanded its offering to become a complete DAW, MIDI sequencer and Virtual Studio Technology (VST) Host.

The popularity of Ableton has exploded with the software establishing itself as an extremely versatile recording and performance tool. It’s just unveiled its eleventh iteration and the love for it among the music production community shows no signs of abating.

Originally launched as FruityLoops in the nineties, FL Studios is revered by many producers, particularly those working within hip hop, grime and EDM.

FL Studios is constantly adding to its software with many seeing it as a great way into digital music making, particularly as it was one of the first graphical interfaces available for producers. Free upgrades as well as a passionate community around it have ensured it remains a very popular choice for producers and musicians alike.

Ableton Live has long been associated with a fast and streamlined workflow.

The latest version, Live 11, takes things to the next level, adding some much-requested features. They include the long-awaited comping system to enable users to organise multiple passes of an audio or MIDI performance into individual takes. It also includes MIDI Polyphonic Expression or MPE. This allows you to simultaneously control multiple instrument parameters.

A long-standing feature of Ableton Live is how it allows users to create clips of the sound of any instrument. This can be repeated during playback without compromising on sound quality. The Session View is also a great function, allowing you to build, audition and experiment with loops before arranging them.

To celebrate the 20th anniversary of FL Studios, manufacturer Image-Line went from the 12th version to the 20th back in 2018.

The big news was the release of a native 64-bit Mac version of the software allowing files to be swapped between Mac and PC versions. In the past, producers would have to invent often clunky work-arounds. But new features seem to land with every version – FLEX is a new preset-based synthesiser while a ZGE Visualizer means you can also come up with videos and images alongside your sounds.

Another great touch is how Image-Line offers a lifetime of free upgrades to all users of the software – meaning you can stay on top of the latest improvements without spending any more money.

Ableton is highly praised for the streamlined and effective functionality it offers music producers. The Arrangement View is at the heart of this, a space where you can see all of the stems – such as recorded audio or samples from plugins – in one place. You can drag and drop easily between screens and use the Session View to experiment alongside bouncing audio within tracks.

A minimal and straightforward look and feel emphasises its great functionality. The lack of clutter means you can focus on music making rather than spending too long working out how to use the software itself.

FL Studio splits creative, mixing and arrangement duties into independent sections, which can be at odds with the ways other DAWs work. The majority enable users to work within a single timeline or space, meaning this can take some getting used to.

If you like working across monitors, then you can split your arrangement and mixer between them. But having a different screen for the playlist, piano roll editing and other functions can be confusing. You must also create clips and adjust lengths in a slightly more convoluted way. Early users sometimes admit to being a little overwhelmed when they first begin to use it. It just means you need to invest a little more time but the results can be brilliant.

Plus the piano roll is very intuitive and the step sequencer can speed your process up.

Ableton not only allows you to make music on your computer but is also strongly geared towards live performance.

The Session View function drives this – it allows full tracks and samples to be mixed in real-time and has revolutionised how electronic performances are presented. It allows you to apply effects, loops and whatever else your imagination can come up with.

If you’re a producer who wants to take their music into the world of live performance, then Ableton offers this functionality and an effortless movement between the studio and the stage. A MIDI controller such as Ableton Push will also help bring your performances to life.

FL Studio can be used in live performance thanks to Performance Mode.

This mode gives users the ability to trigger any audio, pattern or automation clip in the playlist directly, each playing independently of the project timeline. These can be set to loop, play as one shots or other special playback modes such as marching clips. The user can toggle through them with a MIDI device.

Initially, Ableton Live was only available only for Apple’s Mac operating system but it eventually became available for PC as well.

In the past, FL Studio could only be used on PC but this has all changed with the twentieth edition. It can now be used on a mac much to the delight of many music producers.

Your DAW will be the foundation of your music making so it pays to get it right. Fledgling producers should do their homework on all the software available out there – alternatively they can look to their favourite artists and producers to see what they use.

There are several different price points for Ableton Live. Intro (£69), Standard (£319) and Suite (£539). All three share some of the same features with the more expensive versions containing more sounds, effects and software instruments.

Again, it’s worth remembering that FL Studio comes with a lifetime of free updates so you can stay on top of all the latest developments.

Who Uses These DAW’s?

Ableton Live has some powerful producers as fans. Dubstep king Skrillex is one who said of the software in a past interview:

“I think, for laptop producers especially, it’s just so intuitive in the box. Everything is laid out and you don’t have to go searching for things like automation or plug-in parameters – in fact, all the things that are really hard to do in other DAWs. Ableton’s just very fluid and quick.”

Other high profile users of the software include experimental composer Anna Meredith, US auteur Flying Lotus, dance music artist Henrik Schwarz and many, many more.

FL Studio similarly has many big name artists and music makers behind it. EDM producers such as Martin Garrix, Steve Aoki, Bassjackers and Afrojack. The latter said:

“I started using FL Studios when I was about 11 years old, just for fun, making remixes and mixing records through each other just for fun. It felt really easy and obvious, and I never stopped using it since.”

Which DAW Should You Choose?

As we’ve already said, the right DAW for you depends on your own creative habits and processes. Perhaps you’re interested in taking the lead of some of the great EDM producers – or looking to take your productions out onto the stage.

The best option is to try each and see what works. Both Ableton Live and FL Studio have free trial sessions to enable you to road test them before investing. Access them both and give them a go. Good luck!

All musicians should learn music theory; it’s important for the creation of superb music. Devoting a small amount of time and energy to basic music theory concepts can pay off in massive ways.
Read more

There’s no better way to make quick progress and to enjoy learning the bass guitar than by playing real songs. Scales, arpeggios and triads are important for developing great technique. Knowing music theory is necessary if you want to develop a deep understanding of the instrument.
Read more

There’s no better way to make quick progress and to enjoy learning the bass guitar than by playing real songs. Scales, arpeggios and triads are important for developing great technique. Knowing music theory is necessary if you want to develop a deep understanding of the instrument.
Read more